Sarah was just 17 years old when everything she knew was taken from her. Whispers of war coming to her home country of Sudan slowly turned into metal bullets and bodies tossed into mass graves.

Her mother’s voice, once strong, now caught with fear each time she said, “All would be ok.” As the darkness of the Second Sudanese Civil War descended across the country, it robbed, shattered, and uprooted the lives of millions—including Sarah's.

On one fateful day in 1992, war tore Sarah away from her family. Sarah's mother had secretly arranged for her to travel with relatives to a refugee camp. In her mother's eyes, Sarah was old enough to take care of herself and leaving was the only chance Sarah had to secure a good education. When the relatives arrived, Sarah remembers, “I didn't want to leave my mom and go, but she said, ‘God is great and will bring you back some day.’” Those were the last words Sarah clung to as she stared in disbelief at the future ahead of her. A future that likely meant she would never see her mother, siblings, or home again.

Sarah entered the refugee camps in Kenya with her bright smile and charismatic personality hoping for a better life. But whatever hope Sarah had managed to create in her mind was quickly destroyed. While living in the camps, Sarah was forced into an arranged marriage with a soldier she barely knew and hardly ever saw. Life was riddled with constant hunger, sickness, lack of water, and heart-wrenching fear. When Sarah gave birth to her first child, she was determined to do whatever it took to escape.

"I didn't want to leave my mom and go, but she said, 'God is great and will bring you back someday.'"

Miraculously, UN workers saw that Sarah was a young mother in need of help. Within a few months they were able to secure her the necessary identification to grant her safe passage to Canada. As Sarah made her way to Canada she was filled with joy and heartbreak. While it was a blessing to leave for a safer place, she was putting even more distance between her and her family.

Once in British Columbia, Sarah began to build a new life for her and her child. A relative living nearby told her about a congregation made up of refugees from South Sudan, Ethiopia, Sudan, Kenya, and Uganda. Sarah felt a deep connection with these people because they knew what it was like to have a piece of your heart living thousands of miles away. While the congregation gave Sarah hope, her heart still ached, and she wondered if God would ever allow her to see her family again. 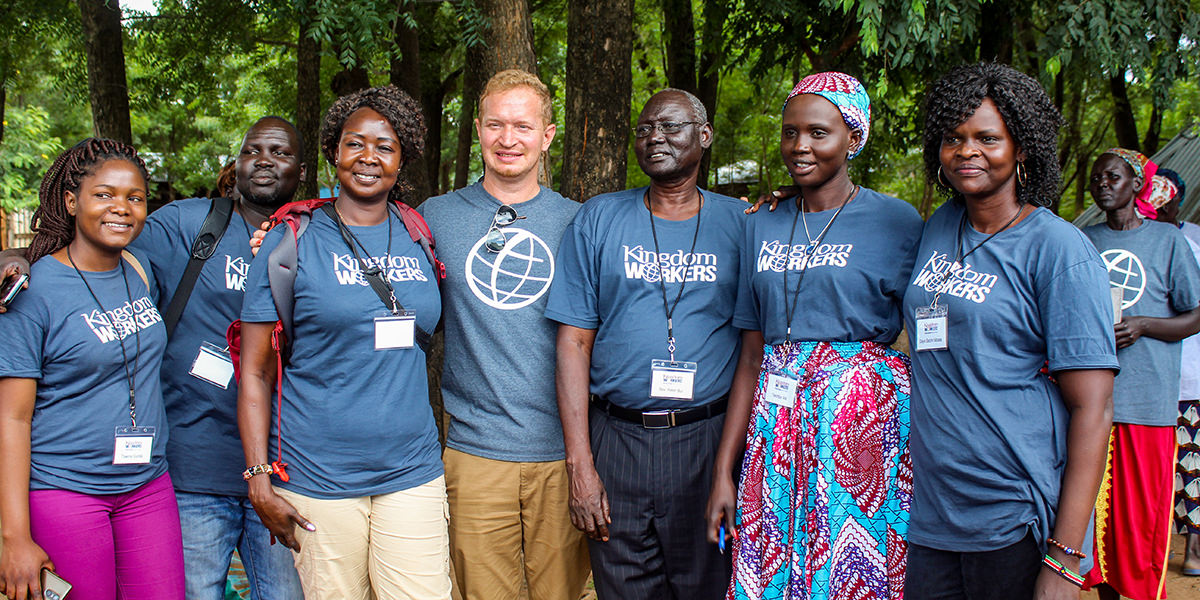 In the fall of 2019, Sarah returned along with five other volunteers to provide WASH (Water, Sanitation, and Hygiene) training to local volunteers living in refugee settlements in Ethiopia and South Sudan. She was also able to help lead educational women's health workshops on menstruation for the women and girls living in the camps.

Sarah and the other volunteers used their experiences as former refugees to connect with the people they served in a way that no other volunteer could. It was a trip that was emotionally and spiritually healing for both Sarah and those she was serving. “I saw the people really needed encouragement to plan for the future. I shared that in the Bible God tells us He gives us the strength and ability to overcome obstacles.” By bringing hope to others, Sarah realized that everything in her life had happened for a purpose, and that God had been with her through it all. But even more blessings were yet to come.

Sarah was able to reunite with her younger sister Rachel in person. “When my sister saw me, she just fell to the ground crying. When I saw her crying so hard, I knew I had to keep it together or we’d both just be crying.” Up until that point, Sarah and her sister had only been able to communicate over the phone and the connection was often spotty at best. Finally seeing each other was reassurance to Sarah of how great God is. “I thought it would never happen, but it did. God provided this, that I would see my family. I am so thankful for this gift from God.”

Over the next few days Sarah was also able to contact her mother. While the two of them did not see each other face to face, they did get to hear each other's voices for the first time in nearly three decades.

"I am so thankful for this gift from God...My heart had doubts. But right now, my faith has grown in my heart."

Throughout Sarah's life, the struggles she endured seemed pointless and cruel. Clinging to hope in God was a struggle but being able to participate in the volunteer opportunity was the spark that reignited her faith. “My heart had doubts. But right now, my faith has grown in my heart.” Now Sarah prays for the success and faith growth of all the people she met while on the trip.

Sarah's story exposes the horrors of war, but it is also a story that brings to light the hope, glory, and love God has for us all. War can destroy things here on earth, but it loses all its power in the face of the God who breathed life into the universe. War tore Sarah from her family, but God brought her back home and made it possible for her life to be an encouragement to those around her, to be evidence of His fierce love and endless mercy. In Sarah's story we see resiliency of the human spirit and the power God has to create beauty out of the depths of immense tragedy, and that gives us hope.