Adi Nafamnanu faced the camera, excitement and determination sparkling in his eyes. As he spoke, his hands lifted to his chest, “Kingdom Workers is so special in our hearts, they were really helpful to us. They have brought good changes to our village.”

Change like the clean water tanks Kingdom Workers had recently helped his community build. Adi was eager to continue that work in Niki Niki, Indonesia, where he lives, and that was possible through the recent Community Health Evangelism (CHE) training held in SoE in late March.

Ever since Kingdom Workers began working in Indonesia in 2014, a goal has been to bring CHE training to the people living there. But it’s a long process, often taking up to a year to complete. Southeast Asia Field Manager Coral Cady Metcalfe explained, “CHE is meant to be the first thing done when you go into a village. You identify local leaders, strengths, weaknesses, and challenges. But when we arrived, the people desperately needed water. We felt it was more important to bring water to these places. We used some of the CHE principles but didn’t necessarily follow the whole program.”

Adi, pictured above, shared, "Kingdom Workers is so special in our hearts, they were really helpful to us. They have brought good changes to our village."

This past spring, we finally were able to hold our first CHE training. We had worked collaboratively with local communities to develop a successful water program. And we had hired a local staff member, Pastor Yunus Banunaek to oversee our efforts throughout the year. Now was the perfect time to begin the process.

“CHE is all about changing mindsets, changing people’s worldview. In Indonesia, many people haven’t traveled beyond their home village. This training can lead to big transformations in thinking.” CHE training gives communities a framework to follow as they create solutions to address the unique problems in their villages—issues like a lack of sanitation units, a need for improved gardening practices, access to clean water, and more.

“Now to him who is able to do immeasurably more than all we ask or imagine, according to his power that is at work within us.” Ephesians 3:20

In total, 22 community leaders from several villages attended the five-day introductory CHE training. Adi was one of the three people who came from Niki Niki. 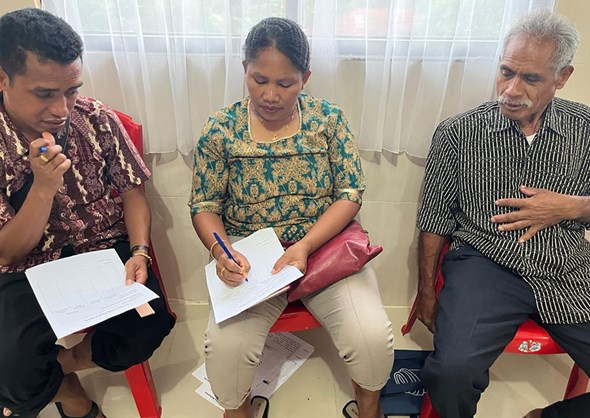 Photos from the CHE training in SoE. You can see Adi in the second photo sitting to the far left.

The focus of this initial training was to determine which villages were truly interested in pursuing a long-term CHE training solution in their village. Throughout the training Coral saw that, “The three people from Niki Niki were really excited about the training. The way they participated, their excitement for the work, it was clear they were energized. And Adi was extremely involved. He had questions and a lot to offer. It became clear that he would be a good CHE facilitator in the future.”

A good facilitator because he knew how to get people talking. He knew what questions to ask in order to help a group develop a deeper understanding of a problem and the opportunities it could present. “Maybe that’s because he is a teacher,” Coral told me, “He was able to lead CHE discussions really well. He will need further training, but it seemed like he knew how to be a good facilitator and that he was so excited about the future of his village and continuing to work with Kingdom Workers.”

At the end of the training, participants were sent home to their villages with the knowledge and insight they had acquired. During the next few months, Coral will work with our local staff in Indonesia to determine which communities they want to further pursue CHE in.

For people like Adi, the opportunities presented by Kingdom Workers CHE training give him a new way of viewing what is possible. Right now, his hope is to bring toilets to his village. And by working together with Adi and additional local leaders, we can equip and empower more people to create a better future for themselves and future generations, all for God’s glory.

How one question changed a whole community

The WASH (Water, Sanitation, and Hygiene) crisis currently impacts 2 billion people according to the World Health Organization. Liana Tyrrell, Malawi Field Manager, shared, “Illnesses caused by contaminated drinking water aren’t just an inconvenience for people in Malawi, they’re actually one of the leading causes of death for children under 5.” But it’s not just contaminated drinking water that is a problem, people also deal with lack of access to proper toilet facilities and handwashing stations.

A Legacy Built on Water

Every October in Wisconsin, something amazing happens. The humid, thick air of summer shifts to a crisp, cool, northern breeze. Trees exchange their green leaves for more seasonally-appropriate yellows, oranges, and reds. Everywhere you look, a pumpkin-flavored coffee drink is available for a limited time only.

But halfway around the world, it’s a different story.