When we arrived at Kakuma refugee camp in northern Kenya, all we could see was row after row of tiny houses. Over the past three decades, war, famine, and natural disasters have uprooted more than 200,000 people and forced them to relocate here, to a wind-swept desert, a place that means “nowhere” in the native language.

But it was in the middle of “nowhere” that our newest projects were happening. A few years ago, the people of Kakuma reached out to Reverend Peter Bur, WELS South Sudanese Ministry Coordinator and Kingdom Workers volunteer. They heard about our work with refugee communities in South Sudan and Ethiopia and wondered if similar projects could be done in Kakuma. In 2021 we pursued a remotely-managed series of pilot projects led by local volunteers Reverend Mark Anariko Onunda and John Michoro. One of those projects was a series of sewing workshops for women.

Our conversations with the local volunteers helped us understand the struggles of life in Kakuma, but talking with someone over the phone only conveys so much. The conditions in Kakuma were unlike anything we had anticipated.

Back in 2019 we both traveled together to meet with refugees living in Gambella, Ethiopia. The climate there is suitable for growing crops. Families have access to water, and children can attend school. 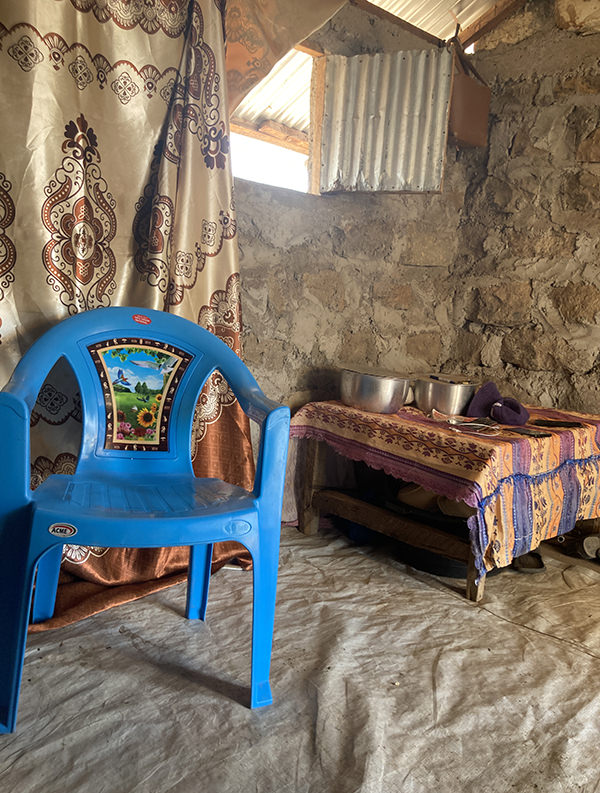 Inside one of the refugee homes.

The people of Kakuma, mostly women and children, have almost nothing. They’re not allowed to gather their own firewood—taking a branch from a tree is a serious offense. Insufficient space and a lack of rainwater make it nearly impossible to grow crops. 60-day food rations last only 30, and water is often in short supply. There is a real sense of scarcity.

In the face of so much struggle it felt like our sewing workshops were too small to make an impact. But that’s not how the women we talked to felt. They told us, “We are not sharing all these problems of ours with you so you can solve them. We know they are just too many for anyone to solve. What we want at this point is someone to hear us out. Someone to share our pain and frustration with.”

So we listened. And thanks to Daya’s careful translation, we can share what we learned. 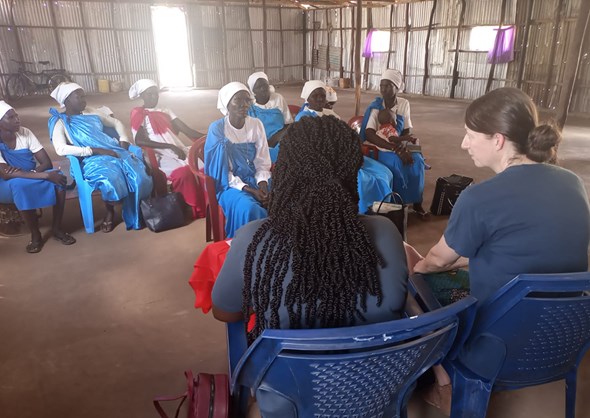 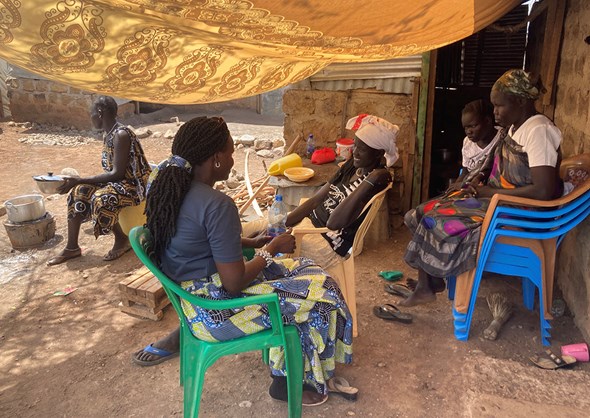 Daya and Alicia listen to the women in Kakuma refugee camp.

One woman told us, “Most of the households here are run by widows who are also raising orphans of their late relatives.” Another shared, “We feel depression from constant stress. We can feel hopeless, powerless, and defeated.”

As women and mothers, it was heartbreaking to see them living under such distress. It’s hard to imagine how we would budget out food for our kids for 60 days. How does anyone decide between eating their food or selling it to buy soap, pay school fees, or purchase medicine?

Yet one participant told us, “When we gather around God’s word, we feel hopeful.” They cling to their faith and the knowledge God is in control—something they learned from the Lutheran congregations there.

The sewing classes, simple as they may have seemed, became the place where they put their faith into action. We saw 2 Corinthians 8:2 come to life, “In the midst of a very severe trial, their overflowing joy and their extreme poverty welled up in rich generosity.”

“As a former refugee, it was almost shocking to see how the people in Kakuma lived. But they were still filled with so much joy and gratitude…they may be physically poor but are spiritually rich.”  Daya Batim Moses, South Sudanese Field Coordinator

Before the sewing classes, most women lived each day within their own home. Classes brought them together and they began sharing their personal struggles. Friendships were made. Eventually they shared more than words. We were told, “When someone says that their food supplies are growing low, someone will say, ‘You and your family can come to my house for dinner tonight, we have extra.’” Sewing participants who didn’t have faith suddenly found themselves going to church with new friends.

As we shared meals, prayed, and laughed together, we saw the Kingdom Workers promise in action. Community members had created a locally sustainable support group that was working to share the gospel and meet people’s needs. It was simple, but it was such a perfect representation of what Kingdom Workers is all about: glorifying God through lasting change.

Thinking about Kakuma, we know there is a rich opportunity to grow and expand Kingdom Workers programming. We’re working right now to help continue the work the teams started. We know that while we cannot fix everything, we can do our part to listen, learn, and support the people of Kakuma and beyond.

A New Way of Looking at Our Work in Nigeria

Recently, we were fortunate to connect with a local photographer named Emediong. Here are some of the photos he has been able to capture and share with us. We love being able to share these new photos with you and we hope that you enjoy seeing these new photos.

Why I'm thankful for a humble bar of soap

13,000 kilometers, over 8,000 miles. That is the distance separating me in Vancouver, Canada from my colleagues, friends, and volunteers in South Sudan.

As you can imagine, having a “commute” this long comes with unique challenges. There are long stretches of time when I don’t hear from anyone in the field because of network issues, broken phones, or busy schedules. When I do hear news, the stories I receive are often updates or general statements. When I ask people for stories about how the Holy Spirit is at work, I usually receive something like, “People are coming to church and our congregations are thankful for this partnership with Kingdom Workers.”

Viviana grew up Catholic, but never felt connected to God. That began to change when she attended a Kingdom Workers Wellness Circle support group.