It’s 5:00 am. A blaring alarm clock shakes Kenny from his sleep. It is completely dark outside, the only light pools on the ground underneath yellow street lamps. Kenny knows that pulling the sheets back and getting ready for the day means embracing the cool chill of early fall. But as much as he wants sleep, he also is determined and motivated to get the day going.

Kenny developed these character traits at a young age watching his mother work tirelessly as a single parent to provide for the family. Growing up Kenny saw how determination and faith could get you through the tough times. “I wouldn't say we were starving or anything,” Kenny explained, “but we did struggle with certain things. I watched my mom work extremely hard and it rubbed off on me. But now we are all doing really good. I have sisters who are in college, sisters who are doing really good in life...I think it goes back to the work ethic. My mom always taught me that if you’re in a hole you can get out of it.”

“I wouldn't say we were starving or anything, but we did struggle with certain things...My mom always taught me that if you’re in a hole you can get out of it.”

Today, Kenny is getting ready to head to his apprenticeship with Weather Tight, Wisconsin’s largest exterior home remodeler. He does this twice a week. Every other weekday Kenny heads to Kingdom Prep high school. At Kingdom Prep, internships and apprenticeships are a required part of the curriculum. Justin, Weather Tight Project Manager, had this to say about Kenny, "We interviewed quite a few kids and Kenny just stood out with how he could conversate like an adult already. It was that personality that got him more into us hiring him. It was like, 'wow this kid seems 18 or 19, not 17 or 16.' And then we found out he had some prior experience with Kingdom Workers."

In the summer of 2020, Kingdom Workers began its pilot project for a new program called Build Up: Mentoring Teens in Trades. The goal of the program is to provide young people with an opportunity to not only gain construction and trades skills, but also develop soft skills while serving people in their community.

See how you can give someone a brighter future.

Laura, pictured right, stands in front of her garage project.

Kenny was asked to join Build Up, and he realized how much he enjoyed working with his hands. Not only that, Kenny also developed friendships with the volunteer mentors who taught trade skills. One of the people Kenny connected with the most was Jeff Ulman, Director of Kingdom Workers Construction. When asked about Jeff, Kenny told us, "I would say Jeff is probably my biggest role model."

That summer, Kenny developed and grew his skills in the trades. And in the summer of 2021, Kenny applied for and accepted the apprenticeship at Weather Tight. It was something Kenny didn't expect to be accepted for because he was so young, but he was thrilled, "I was looking for any construction-based job I could get into," he said, "I like it and I want to have a career out of this." 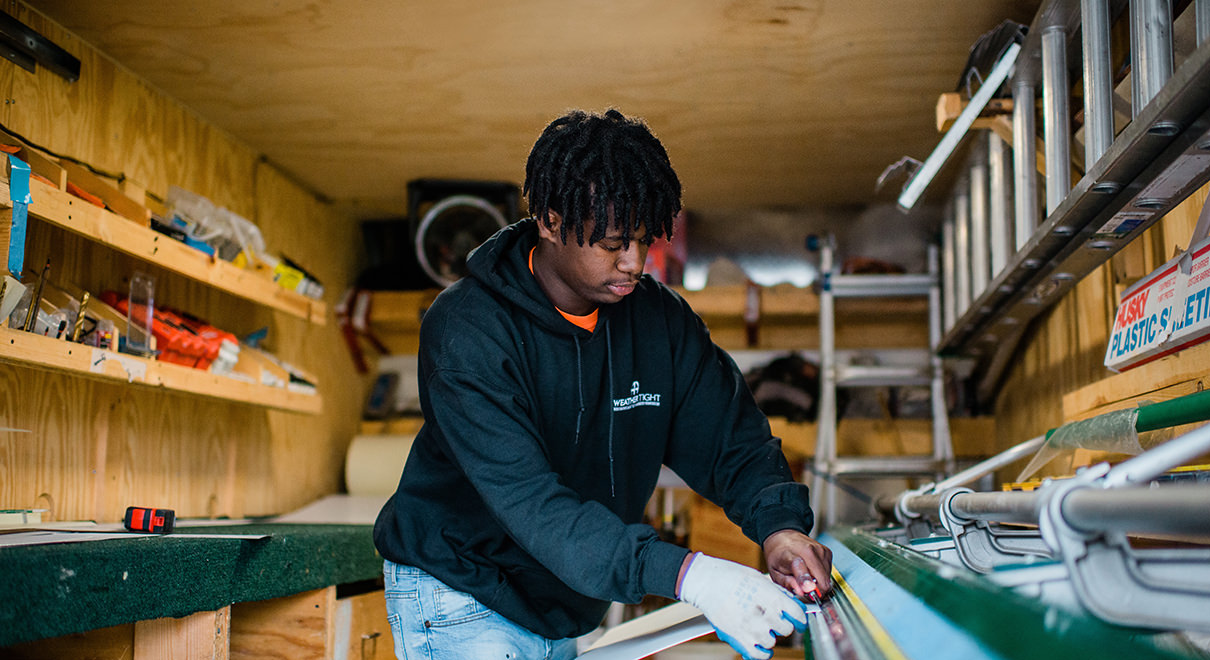 Kenny working on a job site with Weather Tight.

And everyone at Weather Tight is delighted to have Kenny on their team. Todd Schulz, Co-Owner and Vice President of Weather Tight, had this to say about Kenny, “He’s a hard worker. He shows up a half-hour ahead of time every day. He shows interest, and enthusiasm, and excitement. He’s excited to learn…is very respectful. He is everything that we could dream of with an apprentice. After a year or two, we’d like to see Kenny grow and develop into a leader at Weather Tight where he can be assigned his own truck and his own crew.”

From a physical standpoint, Kenny's life is looking bright. He now has the opportunity to start a career where he can create a better life for himself and his family. But the Build Up: Mentoring Teens in Trades program doesn't just want people to have good lives physically. They also want to provide young people with the skills they need to be spiritually strong.

“Everything has to tie back to your faith and what you believe in.”

That's why every Build Up project begins with a devotion or Bible reading. It sets the tone for the project and reminds everyone why they are about to do the work they have planned. When asked about his faith, Kenny shared, “We are all walking our own path as far as our faith. It is good to have Christian-based friends. Everything has to tie back to your faith and what you believe in. So, whether that’s spiritually, whether that’s at a job, anything. I’ll put my faith before everything.”

Kenny isn't alone in that feeling. 73% of surveyed participants who took part in the pilot project said they talked about their faith at least once in the last week. And 76% said they learned something about the Bible during the project. Plus, as more young people begin to confidently talk about faith, it allows for gospel sharing opportunities to happen on the construction site. 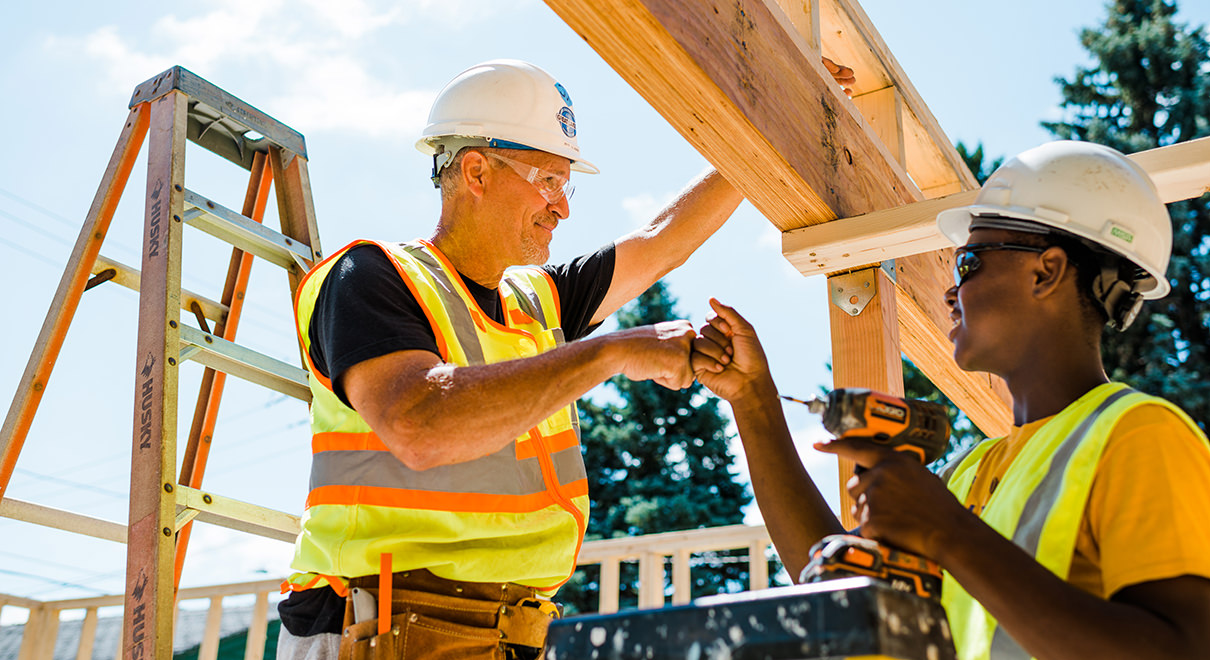 The Build Up program not only prepares young people for careers in the trades but also helps connect them to mentors who can walk alongside them.

Jeff Ulman shared that at one of the projects there was a woman who practices Hinduism. After a few days of project work, she began asking everyone about their faith. "I've actually watched her become more engaged and she's even challenged some of the boys about their Christianity," Jeff told us, "She's asked them, 'What's it really mean to be a Christian?' So I can see her curiosity perking up also."

As Build Up continues to grow and reach more communities, the hope is that it will change the lives of young people, community members, and all those involved. For Kenny, he only has a few more months before he graduates and transitions to adult life. Thanks to the Build Up program, he is looking forward to what life has in store for him.

Kenny’s experience demonstrates what can happen when a community sees the best in its young people, when it celebrates the drive, passion, and determination of the next generation, and supports their growth with God’s wisdom and guidance. And we're only just getting started.

At Kingdom Workers we believe we're stronger together.

Become a Kingdom Worker today by supporting our work.

Coming together as a Christian community is important, especially when people come from different cultures and backgrounds.

In John 13:34 we are directly commanded by Jesus to love others as He has loved us. This isn’t a love that looks at a problem and offers up a single prayer but takes no action or a love that only cares for those like us. This love is selfless, humble, and inclusive of everyone—no matter their culture, upbringing, language, or economic status. This love puts the needs of others above our own. It is action-oriented, outward-focused, open to all.

Creating change in the Apache community

Hope is one of the strongest character blessings God gives us. Hope that comes from the Holy Spirit is what sustains Christians when troubling seasons of life come our way. When Godly hope comes into a community, it doesn’t mean that the struggles will immediately go away, instead it gives people the ability to have peace and joy in their hearts as they walk through the fire...

During life’s darkest moments, the light of God’s love shines the brightest. Driving through the neighborhoods in Panama City, Florida, it is easy to be shocked by the severity of the damage. Hurricane Michael’s category 4 winds ripped apart homes, blew in walls, and displaced thousands. Yet mingled with the loss and the heartbreak, there is still hope even in the wake of devastation...