Five ways to stand with refugees

In 2014, Save the Children, a UK-based nonprofit organization, released a shocking video.

In one minute and thirty seconds you witness a year in the life of a young girl and her family. The initial scenes are full of joy—the family sings happy birthday. The young girl goes to school and plays with friends.

But it quickly grows dark.

You overhear a TV news anchor mention a recent outbreak of violence. Fear casts shadows over the parent’s once carefree smiles. One night the girl wakes up to the sound of gunfire and bombings.

35 seconds after the initial birthday singing you watch the family rush to pack their belongings to escape coming airstrikes. In under one year, the family went from living a “normal” life to being refugees.

The video is hard to watch. Which then begs the question, why watch it at all?

As we approach World Refugee Day on June 20, I’m pointing out five different ways you and I can stand with refugees.

“Not looking to your own interests but each of you to the interests of others.” Philippians 2:4

Many of us are aware of the refugee crisis. We are also well equipped to ignore it. Instead of leaning in and learning how we can help, we focus on me and mine. There’s just one problem with that lifestyle. That’s not how God calls us to live. We see in Philippians 2:4 that we are called to look to the interests of others.

One way you can look after their interests is by taking an interest in their lives.

UNHCR, or the UN Refugee Agency, states that as of the end of 2019, nearly 80 million people were classified as being refugees. And of that 80 million, 40% are children.

I encourage you to learn about these people, the situations in their countries. Read their stories. Understand their struggles. Note their courage and strength. As you do, you’ll see why standing with refugees and supporting them is so valuable. 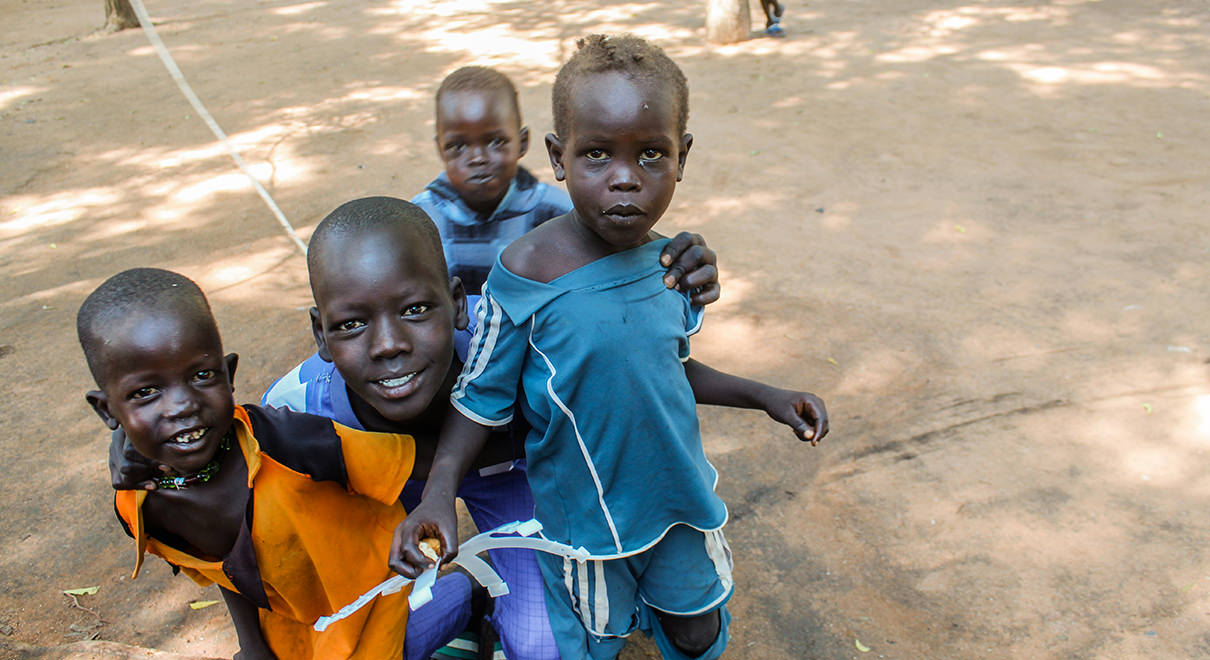 A group of young refugee boys smile for the camera.

“Dear children, let us not love with words or speech but with actions and in truth.” 1 John 3:18

Daya and Sarah, two refugees from South Sudan, boldly shared their stories with us. One thing you learn by reading their stories? Refugees are strong, determined, brave, bold. They survived unimaginable pain yet they rise up above it. They know what it is like to be in need, yet they are often the first to give what they have to help another person.

These stories humanize the refugee crisis. They inspire us to action. By sharing stories with others, you are inviting them to be a part of something bigger than themselves.

God tells us to be moved to action out of love for all that He has done for us. When you connect with and love your refugee neighbors, you won’t be able to sit on the sidelines.

Volunteer your time to help

“The King will reply, ‘Truly I tell you, whatever you did for one of the least of these brothers and sisters of mine, you did for me.’” Matthew 25:40

One direct way to impact the life of a refugee person is to physically volunteer your time.

All across the United States there are nonprofits and organizations that are specifically designed to walk alongside refugees. These opportunities allow you to not only serve your neighbor but your Savior as well. As you cook meals, offer to teach English, and help refugees find jobs or figure out where to live—you’re also doing that for God.

While you help, friendships can be formed that will allow you to share your faith and introduce people to Jesus if they don’t already know Him.

Donate to a cause

“Religion that God our Father accepts as pure and faultless is this: to look after orphans and widows in their distress.” James 1:27

Sometimes it just isn’t physically possible to volunteer. Maybe you’re a new parent trying to function on three hours of sleep and a pot of coffee. Maybe you’re too young or too old to serve. If you want to help but can’t offer your time, consider financially supporting the organizations and nonprofits that can.

One-time donations, recurring giving, and planned giving are all great options depending on how much and how frequently you want to support a cause. Don’t want to donate alone? Get a group of friends or family together and choose a nonprofit each Christmas to support. 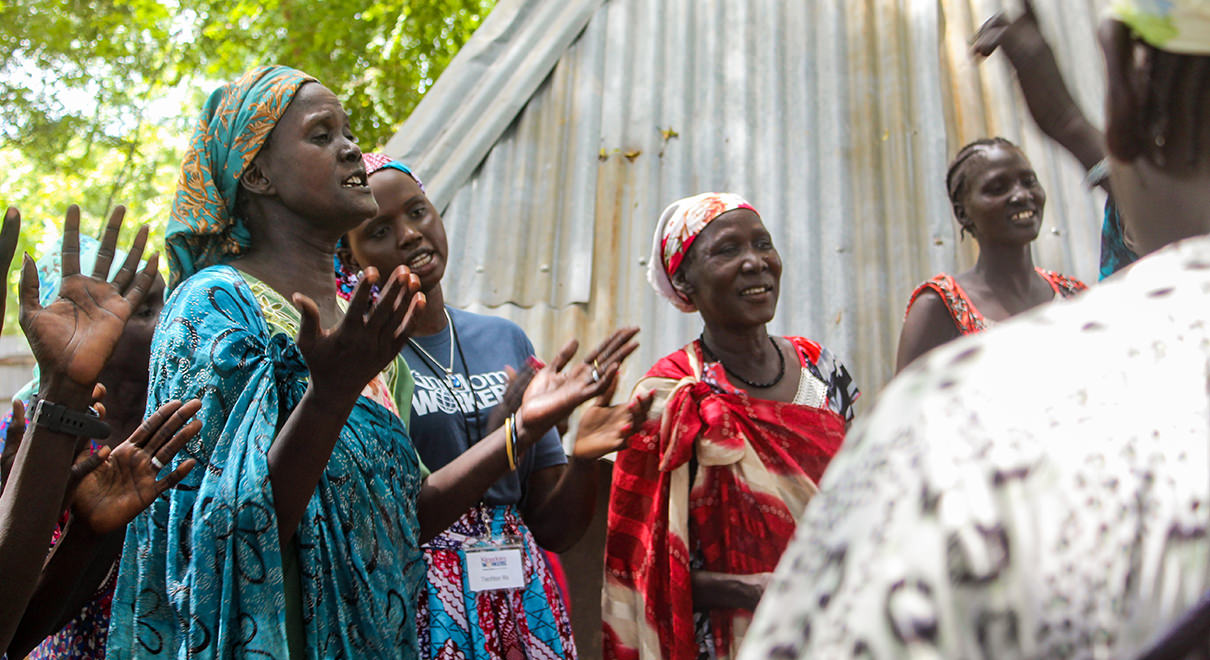 “Devote yourselves to prayer, being watchful and thankful.” Colossians 4:2

Many of us use prayer to treat God like our own personal vending machine. I’ll admit that in times of stress my first prayers are usually something like, “God, help me get out of this. Thanks!” But God wants us to use prayer as a way to develop a closer relationship with him so that we can be filled with His courage, His love, and His peace to do the things He has created for us to do.

When you pray for refugees, don’t just let your words be, “God be with them and protect them.” Look at the words of Colossians 4:2, “Devote yourselves to prayer, being watchful and thankful.”

Being devoted to something means it’s not just another habit, it’s an essential part of who you are and what you stand for. When we pray, our hearts should be open to God. And as we pray, we should be watchful for ways to help and thankful for the opportunities to do so.

Here’s how you can do this. You can pray for the refugees near and far. Pray that God’s word and His love reaches them. Pray that, if it is God’s plan, He will open a door for you to serve. Then, thank God for His love and goodness.

None of us are able to single-handedly solve the entire refugee crisis. Together, that’s a different story. If you come away from this with one new way to stand with refugees, that is a win. Every act of kindness in God’s name makes a difference. It has an impact. Imagine what you could do, and then go do it.

Learn more about our work with South Sudanese refugees in Ethiopia and Kenya.

Kimberly Magsig is the Content Specialist for Kingdom Workers. She enjoys getting to share God's word each day in her work. In her free time she enjoys spending time in nature, trying her hand at cooking new recipes, and having friends over for a game night.

How to Find Your Nonprofit Match

According to the National Center for Charitable Statistics, there are 1.5 million charities, nonprofits, private foundations, etc. in the United States. There’s no shortage of organizations that are supporting the causes you care about.

But how do you decide who to support? How do you find your perfect nonprofit match? And for those of us who are Christian—how do you know if a nonprofit is really working to share the gospel message?

3 Ways I Knew I Was Ready to Give

Giving isn’t meant to be complicated.

But it often feels that way. Especially when money is tight.

I used to think, “There’s no way I can give right now. I’m not ready. It’s great that the one older woman in the Bible was strong enough to give everything she had. But I don’t think God wants me to be without housing or food at 22 because of how much I am giving.”

Later I realized my idea of giving was all wrong.

3 Ways to Improve Your Relationship With Money

Today I want to share three things you can do to have an appropriate relationship with money.

These things are not my own ideas, they are straight from God. And if you follow them, especially as a young person, I’m certain you’ll live a life that makes your non-Christian friends curious.

Because in a world that obsesses over wealth and possessions, a person filled with God’s wisdom is like a breath of fresh air.