From the Ground Up: Building Christian Community

It was a cool summer afternoon when I first met Laura, Kevin, and Michelle. We sat in a spaced-out circle on Laura’s porch. A gentle breeze carried with it a sprinkling of sawdust from the project site just to my left. “A special construction blessing,” Principal Kevin Festerling said with a smile as he brushed the sawdust off his shirt.

And that’s exactly what this project was—a blessing. A blessing for Laura, Kevin, the students at Kingdom Prep, the volunteers from Kingdom Workers, and an entire neighborhood. And it all began with Laura’s husband Matt.

Matt was a selfless guy. He had worked as a Milwaukee firefighter for years and was unafraid to face danger if it meant saving another person. Michelle, a long-time friend of Laura and Matt shared that, “Matt was always doing things to help others. He would do anything for anybody, even people he didn’t know.” And that’s exactly what Matt did when he volunteered to help fellow firefighters in New York during the aftermath of 9/11.

Every time someone spoke about Matt, they shared how funny, kind, outgoing, and caring he was. And how much he loved construction projects. Laura laughed to herself as she told me the countless number of DIY projects he worked on and how he would turn to YouTube, every DIYer’s favorite one-stop shop, when he didn’t know what he was doing.

“Matt was always doing things to help others. He would do anything for anybody, even people he didn't know.”

One of the projects Matt had been promising was to build a beautiful garage for Laura. A space where she could unwind after a busy shift at the hospital by gardening or working on a craft.

But before Matt could begin, he was diagnosed with cancer. After 14 months of chemo, radiation, and clinical trials, Matt passed away. And so the structure remained as it was.

Season after season, the garage waited.

Students from Kingdom Prep spent a week working on the garage and learning new skills.

Across the street, Kevin Festerling, Principal of Kingdom Prep, was searching for a way to connect his students with opportunities to bless their community while learning life lessons. And he had grand ideas. He told me, “One of the projects was going to be to teach the young boys how to invest in their neighborhoods and communities, all while learning valuable construction skills.”

But with each possible chance there were major roadblocks. Who would volunteer to teach the boys the skills? Where or how would they obtain building supplies? Who would offer up their home or building to have a group of high school kids as their construction crew?

It wasn’t until a few months after Matt’s passing that Laura and Kevin were introduced to one another through their mutual friend, Michelle. “Michelle told me, ‘I’ve got an old neighbor who now lives across the street from you. You should go check out her garage.’ And that’s how this all started,” Kevin said with excitement.

Kevin and Laura met to discuss the logistics of having boys from Kingdom Prep build and finish the garage for her. In the same way that Matt was always helping someone he didn’t know, these boys were offering up their time to help a family they had never met. For Laura, “It was a total God moment.”

There was just one final piece missing—who would volunteer to teach the boys and make sure the building was structurally sound and safe?

Jeff Ulman works with a student from Kingdom Prep to explain the next steps for the garage construction.

Enter Jeff Ulman, the Director of Kingdom Workers Construction. Jeff had also long been looking for the right construction project to start the new Build Up: Mentoring Teens in Trades program. When Jeff heard about Kevin and the students at Kingdom Prep, he knew this was a great project for the two organizations to team up to bless someone else.

Kevin told me, “These guys from Kingdom Workers are really the final catalyst for what is all happening. They drive hours to come down here. These guys are going out of their way to teach the boys how to do each task. It has made all the difference.”

See how our Build Up program is changing lives.

In a matter of weeks, Matt’s dream garage for Laura became a reality and, in the process, it brought a whole community together. “It’s been fun to watch the community want to be a part of this project,” Kevin shared. Neighbors brought over daily treats and refreshments, asked if any help was needed, and commended the teens for their efforts. “People have actually stopped and asked for the name of the construction company doing the work,” Laura said. “These volunteers are doing an amazing job.”

What started with a husband’s wish to create a dream workspace for his wife transformed into a community-wide effort that showcased the gospel-motivated love and heart of so many people. It was incredible to see and hear what God had been doing through the kindness of a few on an unassuming construction site. 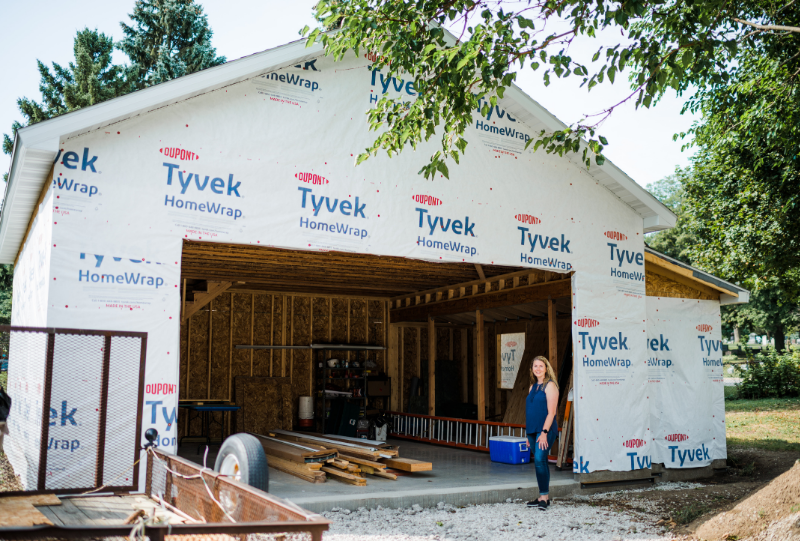 Laura standing next to her nearly completed garage project.

As I packed up to leave, I could feel an excitement in the air. This was only just the beginning of something new that would come to bless so many more families and individuals. “There are so many more projects like this in our community,” Kevin said with optimism in his voice. I look forward to seeing all the things that God will do as these community members, volunteers, and students place their gifts into his hands. Maybe you’ll see us on your block.

What happens after I make my gift?

You’ve hit the donate button. And as technology works on the backend to process your gift, perhaps you’re wondering, “What happens next?”

Or maybe you’re reading this wondering, “If I decide to make a gift to Kingdom Workers, how can I know that my gift is going to make a real difference?”

Whatever your reasoning for clicking on this blog, I’m glad you’re here.

An Abundance of Hope

“Hello Kim-Sensei! I’ve been waiting to meet you!”

These were the first words nine-year-old Arashi said to me in person. After waiting two years to move to Japan, these words and getting to meet Arashi were truly a blessing.

Conversations with the CEO: Bill & Patty

These days it is common for people to move from one job to the next every few years. So when someone spends an extended amount of time, over 20 years, working at the same company it says a lot about the joy and passion the individual has for their work. It also says a lot about the organization where the person chooses to work.

In this most recent Conversation with the CEO, Bill Meier talked with Patty Eagon, Advancement Services Manager, about what it’s been like to work at Kingdom Workers for over 20 years and what she loves most about her work.

Mimi Festerling
God has indeed blessed kingdom prep, its workers, and the community through kingdom prep and its workers and students. May God continue to work. Praise his holy name!
10/25/2020 1:12:17 PM